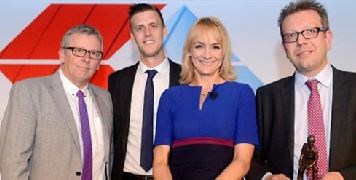 Great news we were announced as the winner of a top industry national award at the UK Roofing Awards which was hosted by BBC’s Louise Minchin at the Hilton London Metropole.

The high profile annual event is organised by the National Federation of Roofing Contractors (NFRC) to recognise and reward outstanding standards of workmanship and safety within the roofing industry with 12 categories of awards covering the full spectrum of roofing disciplines.

KGM Roofing won the ‘Roof Sheeting’ category for the Bennet Building at the Babraham Research Campus, Cambridgeshire – a flagship facility for research and development of cures for modern illnesses with the construction of the building being sponsored as part of a £44m investment into the campus by the BBSRC.

Members of the KGM team were at the event to receive the award – Jason Harvey (Managing Director), David Horton (Drawing Office Manager) and Oliver Bemrose (Estimator).

Jason Harvey said “To win this top national award for one of only 12 categories presented is a major achievement especially as these awards are organised and judged by our own industry. We are particularly proud of the Bennet Building project which was a complete new build consisting of Kalzip roofing and feature fascias resulting in the very impressive end result. Thanks to our team of skilled, highly motivated employees who deliver exceptional work.”