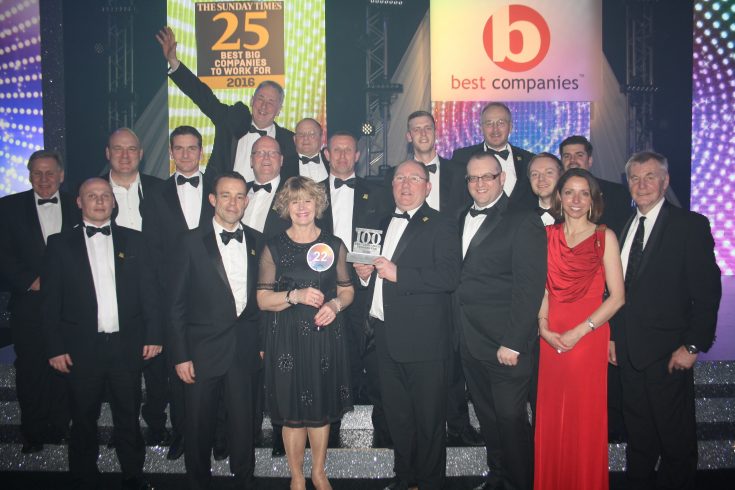 Top Construction Company to work for in the UK

After twelve years appearing in the ‘Top 100 List of Companies To Work For’ Lindum Group has again been crowned as the top construction company to work for in the UK.

KGM employees were among the Lindum Group guests who attended the prestigious awards ceremony for ‘The Sunday Times Best 100 Companies to Work For’ held at Battersea Events Area, London on 25 February and heard first hand that the Group was named as the top building company and ranked 22nd  overall.

Paul McSorley, Board Director, said “Being named as one of the top 100 companies to work for in the UK is a major achievement for any organisation but as a construction company where many of our employees are working outside on building sites during the winter months when the survey takes place it is even more remarkable.”

“I know we have an impressive track record of appearing in the Top 100 list for over 12 years however this is never something which is taken for granted. As the results are totally governed by what our employees say about the company, we take this very seriously as a measure of our performance and it helps identify areas where we can improve.”

The Sunday Times Best Companies to Work For’ lists are compiled based on research from the largest survey of its kind and this year 834 organisations applied and 408,573 employees were surveyed. The survey measures things such as personal growth, wellbeing, giving something back, leadership and team spirit.

The 18 employees from across the Group included KGM Roofing’s receptionist Rosemary Sharp and  member of the estimating team Oliver Bemrose.

Rosemary Sharp said “In my role I get to talk to lots of the team, all of whom are friendly, with first names used by all including the Chairman! In my experience everyone genuinely cares about each other and the wider ‘Lindum Family’, as we call it, is a reality. I have personally received help and support from the company and my colleagues during my time here and feel the award the Group has received is very justly deserved.”

Oliver Bemrose added “After leaving school my first job was in retail but I decided to change career direction and joined KGM as a trainee estimator in 2007. This was the best decision I could have made as, thanks to the training and development support I have received, I am now employed as an estimator and loving my job and the people I work with.”

Jonathan Austin, CEO and Founder of Best Companies, added “I would like to congratulate Lindum Group on their outstanding achievement. We know that the main challenge for many organisations this year will be talent attraction and retention. For organisations like Lindum that have demonstrated their ability to create an engaged workforce and recognise the importance of caring about their employees, they are in a good position to retail and attract the talent they need.”